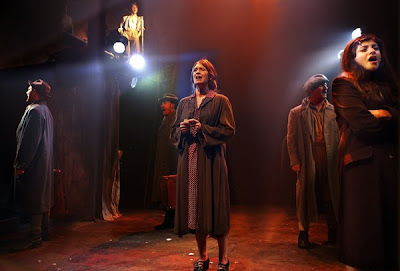 Firstly, the writers K S Lewkowicz and Judith Johnson must be commended for writing a musical about such a notable and tragic period of European history, and also for the sensitive way in which they have put this show together. For the press night a considerable number of Spaniards were present, and their reaction at the end spoke volumes about the emotional power of the evening.

Although ‘Goodbye Barcelona’ is not an account of a true story, it was largely inspired by interviews with five surviving Brigaders (men from across Europe who volunteered themselves to fight Franco’s Fascist army during the Spanish Civil War.) The Republic forces resisted the Fascists for nearly three years despite the ‘Non Intervention Policy’ from Britain and France meaning that they were unable to purchase weapons, while the Fascists were supplied with state-of-the-art military equipment and personnel by Hitler and Mussolini. This whole period is glossed over by the History curriculum, and the fact that British men and women were among those who supported the movement is an almost unobserved fact. The great significance of the period is that it stands on the brink of the Second World War, and marks the beginning of the great fight against fascism. It is a terrific backdrop for theatre.

For the most part it succeeds. There was certainly an air of ‘first night’ about the opening half an hour or so: the cast were trying so hard to sell the show that they lost their way somewhat in the telling of the story. The musical opens in London’s East End, and it was these opening scenes that seemed a bit jagged and over-cooked – not all the jokes were landing, and you could feel the nervous energy gathering. But once the action transferred to Spain and we heard ‘La Pasionaria’s Welcome’ the cogs began to turn nicely. (The sporadic musical appearances of Laura Tebbutt’s La Pasionaria were sung with real Spanish gusto and commitment.)
Spain arrives in a blaze of red sunrise, and the introduction of Pillar (Katie Bernstein) brings a real injection of positive energy to the play. Bernstein plays the role with such senstivity, hiding her grief and desperation behind a front of sensuality, confidence and Iberian determination. She grew with the performance, and with each scene you could feel her stripping away layers of Pillar’s defences, baring herself to Sammy (Tom Gill), the eighteen year old East-End lad who is guided to Spain by his conscience and personal experiences of fascism. He is another who grew with the performance, and gave a highly convincing portrayal of a young man’s fear in the face of brutality and war.

Sammy’s mother, Rebecca (Lucy Bradshaw), is tortured by her son’s departure, and leaves London to follow her son to Spain, becoming a volunteer nurse. She gave a beautifully measured performance, never indulgent or over-played. It was a shame that some backstage clunking and flapping scenery got in the way of some of her more poignant moments. Hopefully this will be remedied as the run continues.

The two stand out performances of the night were Mark Meadows, as the tortured soldier, Jack, and John Killoran as the wounded anarchist, Ernesto.

Mark Meadows’ impressive CV reveals is the former musical director of the world-famous singing ensemble, The Swingle Singers. He has had an impressively varied career, performing with the ground across the world, including in La Scala, Milan, and recently having finished playing Frank Lockwood in ‘Betty Blue Eyes’ on the West End. In ‘Goodbye Barcelona’ he plays Jack, the essential comic ingredient. He knows how to make a joke stick, and that is vital in getting this show of the ground, and for providing the relief to the tragic backdrop of the show. Like Bernstein, he covers his own grief behind a wall of glossy confidence and cockiness, but his own history and experience is never far from the surface.
It is John Killoran who won it for me though. His relationship with Bradshaw is played out beautifully. What begins as some cheeky back-chat in a hospital ward quickly crescendos into something more serious, and, in the most unlikely way, the relationship between a Spanish anarchist and an East End widow becomes the most endearing and compelling plot-line of the whole show.

Ultimately, the show succeeds in hitting the spot – the second half is particularly well-tuned. But like so many musicals the story itself is slightly tarnished by failing to fully balance the score with the play. Occasionally, I felt that I was listening to dialogue which was only serving to pave the way for a new song. So few musicals really get this balance right. The music really needs to be blended into the text in order to get the right effect, particularly in shows which deal with such grandiose backdrops as the Spanish Civil War. For me, it is one massive reason why Les Miserables continues to enjoy such success around the world, and why Sondheim succeeds in creating such magic again and again: the linkages between spoken text and singing seem so seamless that you are barely aware of them. None of this should dissuade you from seeing and experiencing a wonderful night of theatre!
Goodbye Barcelona continues until 23 December, buy tickets here.
Written by a Thoroughly Modern Man, Alex Knox.