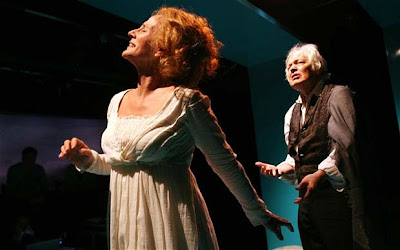 Judgement Day is a new version of Ibsen’s “When We Dead Awaken”, adapted very comprehensively by Mike Poulton and staged, for the first time at The Print Room. Ibsen is not my favourite playwright, and I often find myself expecting the worst – lengthy and wordy, his plays can be quite overwhelmingly full on. Judgement Day runs at only eighty minutes and, without an interval, is a dramatic and consuming piece for the audience.
Ibsen’s play gives a creepy insight into the life and preoccupations of a tortured artist, Arnold Rubek. After creating his ultimate, highly regarded work, the master sculpture ‘Judgement Day,’ Rubek has become deeply unsatisfied and consequently angry. He resents his young optimistic wife and searches desperately for inspiration. Holidaying away in a spa hotel, his past love and muse Irena appears, mysteriously dressed in white and accompanied by a nun. She reignites his passion and he hopes for the future of his art now he has again found his inspiration, however Irena seems unable to give him what he so urgently desires. This is a poignantly autobiographical piece, and like Rubek, Ibsen is critically examining and scrutinising his artistic output.
The production is engrossing and powerful, though at times a little too melodramatic, with little thematic journey. Michael Pennington is compelling and impressive as the frustrated artist. He manages to portray a weary man with a crazed fire in his eyes, and his devotion and energy onstage is commendable. Penny Downie plays the impossibly possessive Irena, Downie commits to the role but seems a little daft at times, wafting around the stage wide eyed. I loved watching Sara Vickers as the young trapped wife of Rubek, she is suitably feisty and works beautifully with Pennington.
Despite the attractive adaptation and some intuitive directing from James Dacre, no one can deny that this play is bizarre and perhaps a little self indulgent. As ever, the Print Room is brave with its programming choices and luckily here the acting is superior enough to pull it off.