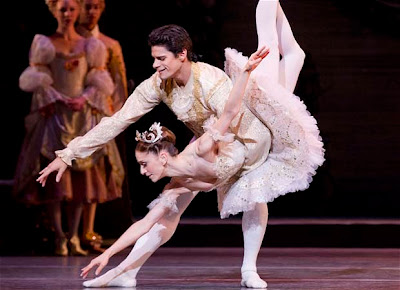 It took a minute to remind ourselves of the story of Sleeping Beauty, without getting confused and preoccupied by Snow White and Cinderella. Turns out Sleeping Beauty is the one who if she pricks her finger is destined to die, thanks to a mean wicked fairy who places a curse on her at birth. Luckily a kind fairy partially reverses this enchantment so Sleeping Beauty will only fall asleep for one hundred years. The inevitable happens and the princess falls into a deep sleep for a century until awoken by a prince who breaks the spell, then they all live happily ever after.

Once I’d recapped all that, I was free to enjoy the dancing on the Royal Opera House stage, which was, as usual, quite spectacular. Unfortunately we were once again slumming it in the slips… as previously in the interval I skipped down a few floors to take up empty stalls seated but on this night the stewards were having none of it. It seems to me that the posher the theatre the ruder the stewards are, it is a rule that certainly applies to the Royal Opera House and Royal Albert Hall. We were unkindly escorted back upstairs, the power hungry manager didn’t believe I even had tickets!

As is often the case in ballet, the narrative is loose and to a certain extent unimportant. The beautiful score by Tchaikovsky tells the story as much as any indications on stage and it is the dancing and awe-inspiring skill that the crowd come to see. Marianela Nunez is radiant as the pretty in pink Princess Aurora, she lights up the whole auditorium with her glowing smile and dances with an elegant ease. Nunez is amazingly light footed and yet possesses a strength that shows confidence and maturity.

I am not in a position to judge ballet technique and yet all the fairies, particularly the Lilac Fairy, Claire Calvert and Helen Crawford as the Fairy of the Woodland Glade really stand out as exceptional, perfectionist dancers, completely faultless throughout. Marius Petipa’s choreography is dynamic, especially the ensemble work and he takes extra care with the final poses making full use of the stage.

I was disappointed with the set, rather lacklustre and flimsy it doesn’t evoke the magical fairytale world I was hoping for, luckily the dancing makes up for it. It was a real shame about the stewards, as their officiousness threatened to ruin our night and at somewhere like the Royal Opera House I would expect more from the staff.