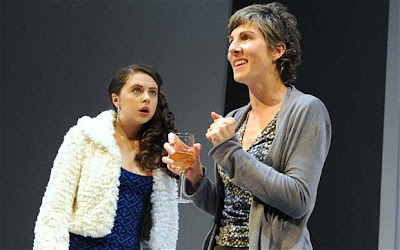 I really enjoyed Jumpy at the Royal Court, often the experimental plays performed at this boutique theatre encourage you to think too much, but April De Angelis’ new drama is just the right mix of fun and thought provoking subject matter. There is nothing terribly groundbreaking perhaps about the theme: a life-after-fifty crisis for a middle class married couple and their difficult teenage daughter… but what is wrong with that?

Writer April De Angelis has a way with words, and the Royal Court seemed to catch alight with laughter at her witty script. It helps that the play is led by the great comic actress, Tamsin Greig who commits to the role and adds a spark of her own personality as mother and wife-in-despair, Hilary. Greig is ultra-relatable and manages to be funny, desperate, angry and timid so naturally that you wonder if the part was written for or about her.

As ever, the Royal Court operates a slick production with sharp lighting and music shifts to match the action. The set, a plain white box, allows the drama to bounce off the walls and seems to magnify every emotion, though at times I wished for a few more props. The cast work together beautifully as a team, with particular chemistry between Greig and her on stage daughter Bel Powley as Tilly.

Doon Mackichan is absolutely hilarious as Frances, Hilary’s best friend; at times her scenes with Greig reminded me of similar situations in ‘Absolutely Fabulous’ and looking at her resume, I realised that I recognised her daft but brilliant humour from tv series ‘Smack the Pony’! Sarah Woodward is suitably cruel and calculating as mean mum Bea, but the actor who made me really giggle was Richard Lintern as Roland. Lintern is charismatic and naturally funny and with De Angelis’ fast paced jokes, he excels.

You can’t complain when you come out of a play with cheeks aching from laughing, and after Jumpy I really did. April De Angelis carefully balances humour and deeper meaning to create a play that resonates.