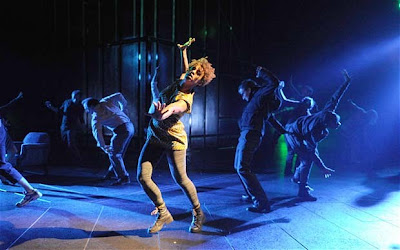 13, Mike Bartlett’s new play at the National Theatre is not the best show to see if you suffer from nightmares already, which I do… it is intended to scare. Set on an intimidating stark stage, it is another dreary morning in London: students are rioting, war is looming and everyone is waking up from the same identical haunting dream, but no one knows what it means.

Most obvious to me is the similarity of 13 to Bartlett’s earlier work, ‘Earthquakes in London’ which received rave reviews last year in the National’s Cottesloe Theatre. 13 feels like yet another play depicting the discontent and gloom of modern society, showing London to be a depressing well of misery and debating the political unrest for far too long. But whereas Earthquakes in London was slick and illuminating, 13 doesn’t say anything very new.

After a fast paced and eventful first half, the second half is weak and dull in comparison. Focusing solely on the impending war, the other issues thrown up at the beginning are left unaddressed and unanswered. We are left watching a stale and dragging political conversation and I walked away feeling dissatisfied and disappointed.

I went to the first preview so allowances must be made for some imperfections and the cast mostly acquitted themselves well. Adam James is suitably self involved as Mark the disillusioned lawyer, he is distracted by the recurring nightmare and desperately searching for an explanation, his rapidly escalating terror is captivating to watch. Lara Rossi as student Holly is memorable, she strides about the expansive stage and looks at home at the National. Terrifying, frank young Grace Cooper Milton is astounding as Ruby, despite being the only child in the cast she, at times outshone her onstage parents with her convincing tone and presence.

It is a big cast and a challenging play to produce for director Thea Sharrock, but I feel her vision just isn’t as inspiring as Rupert Gould’s impressive production of Earthquakes in London. It is also not helped by the vast stage, the Cottesloe’s scale added to the impact of Earthquakes, here in the huge Olivier all the intimacy is lost.