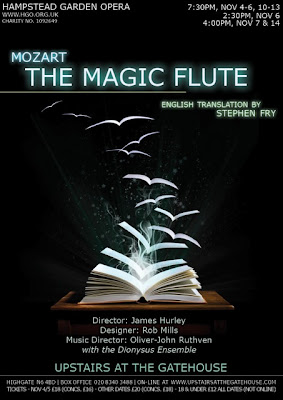 The Magic Flute is surely one of the most theatrical operas in the standard repertoire. It combines comedy, tragedy and magic, but is above all a moral story about love and fidelity. Upstairs at the Gatehouse has been Hampstead Garden Opera’s (HGO) home since 2001, and this year they celebrate their 20th anniversary with Mozart’s masterpiece.

As an adoring fan of Stephen Fry, I was delighted to discover he had translated Mozart’s libretto, originally in German. This witty script definitely makes the piece more family friendly. Fry translated the work for Kenneth Branagh’s film, and HGO are perhaps the first company to perform it to a London audience. The young singers have good diction, and because the venue is so small, you can hear every word.

James Hurley directs the opera, with costumes by Madeleine Millar and set by Rob Mills. At the helm of the HGO band is music director Oliver-John Ruthven, who I myself have been lucky enough to be conducted by in the past. The production has not one, but two talented casts, made up predominantly of Oxbridge graduates and other twenty-somethings. I guess with this in mind, I shouldn’t have been surprised to spot a few friends in the cast.

I saw the show on their first night, and I felt the excited anticipation in the air. Director Hurley has decided to set the opera in a child’s playroom, which however strange, is quite intriguing to watch. The only problem is the presence of adult themes that don’t quite suit this vision, and make the already complex story even more confusing. The singers however, seem to relish the unique setting and play around with their characters with an amusing quirkiness.

The star of the show is, without a shadow of a doubt the 22 year Guildhall student Raphaela Papadakis, who sings with such clarity and ease, she has the skill of an older singer, but the delicate freshness of a young girl. This is Raphaela’s first production with HGO, I only hope she stays with them, as she brightens up the whole night. I also loved watching Samuel Queen, who is completely adorable as birdcatcher Papageno. He wears a hilarious adult size babygro decorated with birds, I was delighted to see his companion Pagagena in a matching outfit, these are genius finds from Madeleine Millar. I can honestly say that these amateur HGO singers are more pleasant to listen to than the professionals I heard in The Barber of Seville a week earlier.

The Dionysus Ensemble accompany the singers playing Mozart’s recognisable tunes with experience and style. I was, unfortunately seated a little too close to the musicians and found they occasionally overpowered the vocalists.

A bizarre interpretation of a favourite classic, but more importantly a bunch of extraordinarily talented musicians, frolicking about and singing their hearts out. Hampstead Garden Opera is definitely a company to look out for!