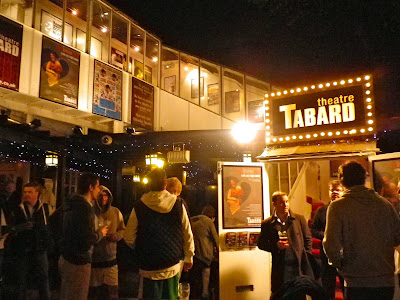 What a magical show! The Tabard Theatre in Chiswick has been journeying to exciting places over the past few years. At a time when many fringe venues are strapping down on budgets and sacrificing quality, the Tabard is continuing its steadily upward incline.

Recent shows such as ‘Ruddigore’ and ‘You’re a Good Man, Charlie Brown’ have extended the capabilities of the small stage, and it is clear that designers and directors are becoming more strategic in their utilisation of the space. Their new production of Rodgers and Hammertein’s ‘Cinderella’ is the finest I have witnessed at the venue, and is one of the best pieces of fringe theatre I can remember seeing in London.
The show itself is a real gem from Rodgers and Hammerstein, with a terrific score featuring songs such as ‘Do I Love You Because You’re Beautiful?’, and ‘There’s Music in You’, plus fast-paced and witty passages of dialogue which pose an entertaining and tongue-in-cheek slant on the Cinderella story, whilst never dumbing it down.
But why is it so rarely performed? Well, it wasn’t actually written for the stage, but for a one-off live American TV broadcast, starring Julie Andrews (107,000,000 people tuned in to watch it). It was later adapted for the theatre but did not receive extended runs, and has not been seen on the London stage since 1958. Cinderella is a show with so many potential pitfalls: it has to avoid being seen as a cheap imitation of a pantomime, the key characters could easily come across as plastic versions of themselves: the Prince could be played as wet-flannel royal, and Cinderella as whiter-than-white plastic doll. And then there is the fact that everyone knows the story of Cinderella inside-out and backwards, and will bring pre-conceived expectations to the show. We all know, for example, that the transformation scene concludes the first act, and has to set hearts fluttering into the interval. How can a London fringe theatre above a pub possibly match the magic of major pantomimes with vastly disproportionate budgets?
But the director Alex Young, and designer Christopher Hone have pulled off a superb achievement. The set is sprinkled with wonderful ideas: a chandelier is surrounded by lit lanterns (later to become pumpkins), which rise and fall from the ceiling, a miniature emerald palace stands high up on a raised level, from which a curving staircase descends, thrones appear from behind fire-places, banners unfurl at the click of a finger, circular segments of wall swivel to reveal royal family portraits. Cats, mice and birds are expected to drift in and out of scenes, and this is done beautifully with effective and graceful puppetry: the transformation of the mice into horses is a moment of genius.
All this could have been wasted were it not for a strong cast who avoid falling into the pantomime trap of caricature. Cinderella (Kirsty Mann) is sparky, quick-witted, and not merely a dreamy wife-to-be of the Prince. In the garden scene (shortly before the clock strikes twelve) she isn’t always overly-impressed with the heir to the throne, actually pulling away when he initially leans in to kiss her. She is less Disney princess, and more Middleton-esque girl-next-door, ready to break it off with a prince if he’s not what she’s looking for. The relationship between servant and Prince is beautifully done: there is warm and natural chemistry between Mann and Vlach Ashton (Prince Christopher). Matt Elson’s choreography for the second act waltz is beautifully done, making light of the height difference between the pair.
Helen Colby ensures that the energy of the show never drops. She has a pivotal role, playing both Cinderella’s Stepmother and the Fairy Godmother. Those familiar with Rodgers and Hammerstein’s works will know that darkness is never far from the seemingly tranquil surface: the racial tensions of South Pacific, Nazi invasion in The Sound of Music, and the lecherous Jud in Oklahoma.
It is Colby’s Stepmother who performs this role in Cinderella. Her comic touch in dealing with her frightful daughters is balanced with flashes of true, sinister venom towards Cinderella. Her stepdaughter is a victim of domestic abuse (Colby carries a whip for most of the opening scenes), and this adds an unexpected edge to a story we all thought we knew. The show is being sold as a family show by the Tabard and it helps that Colby switches into a breezy, motherly, cockney Fairy Godmother, in order to off-set any worried children in the audience – Colby’s performance is both sides of a coin, helping to redeem the bitter widow so full of loathing for the girl who serves as a daily reminder of her late husband.
If any of this sounds a bit deep it is because I have barely touched upon the performances of Lydia Jenkins and Kate Scott as the two Stepsisters, Grace and Joy. From the start they put to bed the conception of ‘the ugly sisters’, for neither is remotely ugly in anything but personality and demeanour. They must have had such fun in bringing these quirky characters to life, developing almost reptilian walks, and spoilt ‘Made in Chelsea’ accents: their Act 2 ‘Stepsisters’ Lament’ is a gem of a number.
A mention must go to Josh Carter who is so convincing as the colourful Prince’s aide, Lionel. He makes so much of a role which could easily have been forgettable: the early scene in the Royal Parlour between him and Vlach Ashton is so effective in its ease and simplicity.
Brendan Matthew and Sarah Dearlove make the most of their roles as King and Queen, particularly in their charming song, ‘Boys and Girls Like You And Me’ – originally written for Oklahoma.
A word, too, on the band, who bring a wonderful score to life with energy and a rich texture – impressive from such a small ensemble. Credit must go to Musical Director, Eamonn O’Dwyer and Assistant Musical Director, Jody Robinson.
This has raised an already high bar for future shows at The Tabard theatre. If you only see one piece of London Fringe theatre this Christmas, make it Cinderella!
Continues until 8 January 2012, book here.
Written by a Thoroughly Modern Man, Alex Knox.