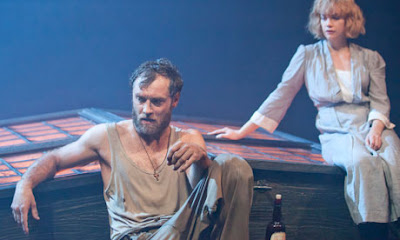 The Donmar’s production of Anna Christie is an almighty whoosh of emotion and power. Eugene O’Neill’s 1921 drama depicts a misty seaport where a fallen woman returns home to her father after fifteen years apart. Father and lover fight for her affections until her secret past life of prostitution is revealed, causing both to back away with equal measures of disgust and hatred. After a torturous few days where both seem intent on destroying her, she is forgiven and the situation is resolved. In fact at the conclusion little seemed changed from the opening scenes, but an important dilemma is left lingering, proposing Anna Christie as ‘the right kind of prostitute’.
I was overwhelmed by the imaginative staging and wonderful set – it is incredibly evocative, and the mock rainstorm is realistic enough to make you shiver in your seat. Visually it is a real treat, the stage evolves simply but miraculously from a musty bar to a wayward ship, helped by brilliantly moody lighting design from Howard Harrison.
There is no denying Jude Law is a great actor, and having never seen him on stage before I was eager to see his portrayal of Mat Burke, the muscular shipwrecked Irish broker. He is certainly not playing his usual suave role – here he uses a very different kind of charm to woo the ladies. Law quite literally throws himself into the part, rampaging across the stage and exerting huge amounts of energy; he manages to conjure up a deeply nuanced character that will convince any critic of his abilities.
Stunning performances are seen elsewhere too, I recognised the expressive face of Jenny Galloway immediately, having recently seen her in Cause Celebre and was delighted to watch her witty interpretation of Marthy Owen. David Hayman is sensational as Chris Christopherson, the sentimental father desperate to win his daughter back having abandoned her. But the real star of the show is Ruth Wilson, with her gritty depiction of Anna. She manages to be both vulnerable and tough and is startlingly striking in her cropped blond wig – she commands the stage, certainly an actress to watch for the future.
It is the wobbling accents that break the magic from time to time, and I had to suppress a giggle occasionally. Jude Law is the main culprit staggering between a heavy Irish accent and what sounds like a quirky Jamaican droll. Ruth Wilson seems to falter momentarily too with her tricky accent but David Hayman, though at times incomprehensible, manages to speak with impressive consistency throughout in his Swedish – English accent.
Anna Christie continues until 8 October at the Donmar Warehouse… beg, borrow or steal a ticket because they are all sold out.