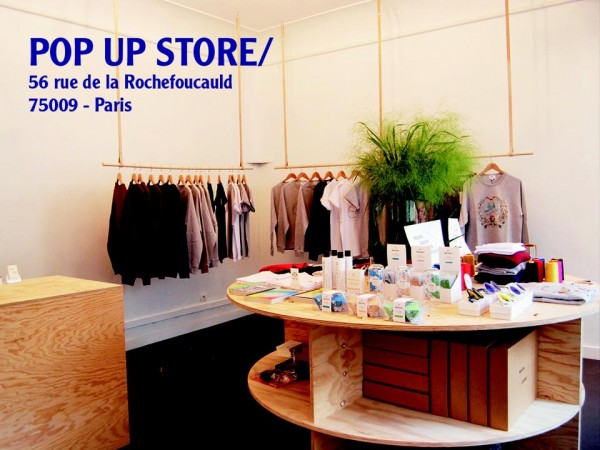 I know I wrote about Maison Labiche very recently, but their pop-up shop looks so exciting I can’t help but mention them again. The hipster design studio has set up shop at 56 de la rue de Rochefoucauld to celebrate young Parisian designers and made-in-France craft, the perfect place to find a quirky Christmas present.

Three years after its birth, the Maison Labiche atelier created by Marie and Jenny, opens the doors to its first pop-up store in Paris. As well as offering its signature embroidered t-shirts and sweaters, the temporary space is selling a carefully curated edit of accessories and decorative objects by young Parisian labels, until the end of the year.

The chic collection includes fragranced clutches from Kerzon, sunglasses by Waiting for the Sun and Bois2, hand-made lingerie from Slip Français, cult Parisian stationary by Papier Tigre, umbrellas by Kumo and watches from Rich Gone Broke, this minimalist new space created by Jenny Richard, is a celebration of contemporary cool and French craftsmanship. I want it all.

Discover the Maison Labiche & Friends pop-up store right up until the end of the year, at 56 de la rue Rochefoucault, open Tuesday to Saturday.

The HAY Mini Market launched at Selfridges during the London Design Festival 2014 and is in residence until the end of the year. The supermarket inspired shop, first presented during the Salone del Mobile in Milan, offers a range of HAY and WRONG FOR HAY accessories, including glassware, stationery, decoration, gifts, textiles and more.

My little sister and I loved flicking through the gold rimmed notepads, trying out the mechanical pencils and stroking the beautiful patterned cushions. This is a place for design fans and stationery addicts. 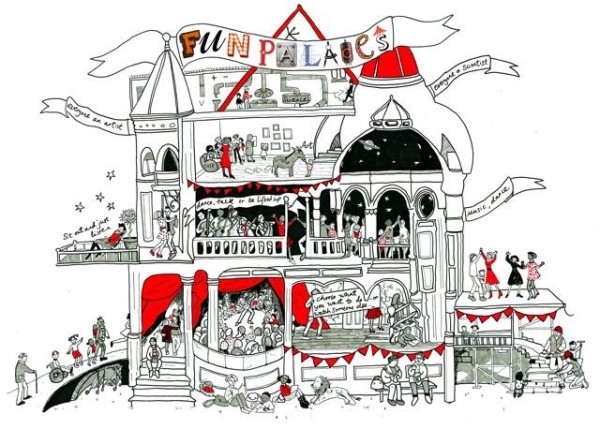 Everybody loves a good popup. We would queue round the block for renaissance-themed speakeasies, and salivate over Moroccan-style hickory-smoked artisanal hotdog vans. If entertainment in London’s twenty-teenage years have been defined by anything, it has been this 6-week window format of culinary and beverage innovation which has become so predictable. It is flitting, if hollow. Well this popup initiative is different. Regular readers will perhaps be disappointed with a lack of photos of mouth-watering plates of artistry, but bear with us, for the project discussed in this post is just as intriguing, and might even spur one or two of you into action on the first weekend in October. Fun Palaces is a popup project with principle.

I cannot tell you a huge amount about the 100+ popup Fun Palaces which will emerge across the UK, and reach as far as Iceland and Canada on 4-5 October. I cannot tell you because their form, content and context lie in your hands. Fun Palaces is an initiative seeking to strengthen communities through creativity. Channelling the vision of Joan Littlewood and Cedric Price – in the year of what would be the 100th anniversary of the former’s birth – Fun Palaces were originally supposed to be spaces where communities might come to perform, learn, teach, relax, or really engage in anything, so long as it was fun and creative. 2014 sees an eccentrically wide range of Fun Palace locations and activities, from physics lessons in Brockwell Lido to Murder Mystery in Birmingham. Fun Palaces 2014 will even transcend physical space, as several online communities have formed to take part electronically.

The aim is to build communities, not just audiences, and those behind the project believe absolutely in the power of creativity that so often lies dormant in each of us. “Everyone an artist, everyone a scientist”; so Joan Littlewood believed, if everyone was only given the chance. Fun Palaces were her and Cedric Price’s idea for “laboratories of fun” and “universities of the streets”, and if any of this sounds as interesting as it should, then make sure to visit funpalaces.com for information about local initiatives which have already signed up. Of course, if there isn’t one in your area that appeals to you, then sign yourself up to create one, and get in touch with others in your area. Get inspired, get creative, and above all have some fun!