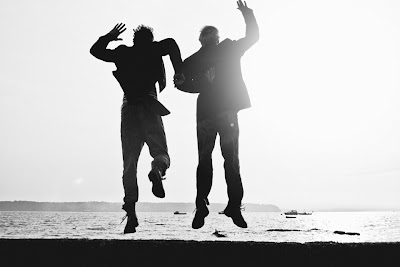 Frankland & Sons was an intriguing production, especially as this was my first review. Written and performed by father and son John and Tom Frankland, the performance tells the very personal story of three generations of the Frankland family, stemming from John’s father’s letters to his wife while fighting in the Middle East during both World Wars. As father and son delve into their shared history, facts taken for granted are laid bare, disproved, and suppositions come crashing down before the audience’s eyes at the climax of the narrative.

Having spent a long evening unearthing previously unknown family truths of my own the previous day, it seemed a fitting theme for a play to address. In an age when family heritage is newly-accessible online, and programmes like Who Do You Think You Are? explore previously lost personal history, I was excited to see what the stage could contribute to this emerging trend.

Unfortunately, Frankland & Sons failed to live up to this potential. The play started, both in the performance and as a starting point for the men’s research, with a suitcase of letters, inherited from John’s sister Barbara, who died in 2006. Once read out to the audience, these were hung from a timeline, overhanging the stage, along with balloons and ribbons marking significant events along the narrative. While this was an interesting use of space and a neat concept, it created some unnecessary fuss, and detracted from the direction of the storyline, although the second half is less involved with hanging letters from string, and meatier in terms of content. At the same time, the mood of the performance lurched somewhat unconvincingly from slapstick humour to deep emotional revelation, in a relatively uncomfortable rhythm, and what momentum was created was broken by an unnecessary interval.

The relationship between the two men is intriguing too, but again falls between two stools in terms of the final result. It was unclear, perhaps to the performers as well, to what extent they were playing themselves, playing a theatrical version of themselves, or simply narrating their family’s history. Their relationship is nevertheless one of the strongest and most appealing aspects of the play, shown perfectly in two mirrored moments in either half, as one scolds the other, and visa versa. Consciously haphazard and endearing, the Franklands are definitely worth watching, even if the play itself doesn’t quite deliver.