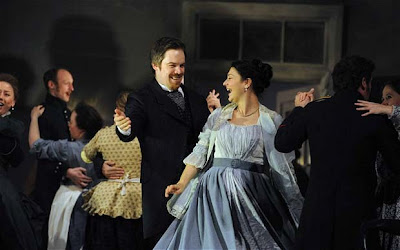 Pushkin and Tchaikovsky make a potent combination. Eugene Onegin is a staggering opera – one of the greats, and this new joint-production (with the New York Metropolitan Opera), directed by Deborah Warner, is a fresh and exciting version.

As always at the ENO, the opera is sung in English. This is not normally a concern, however this is one of the weakest translations I have heard the ENO work with. The rhymes are, at best, silly; and the language is often predictable and frothy. This won’t matter to audiences in New York, who will no doubt hear it all in Russian.

Putting this to one side – the staging is impressive. The first act is staged in a country house, looking out on to the path and surrounding fields. It is a huge set, with massive girders on the ceiling, a staircase to the right, and large swinging barn-doors separating the relative safety of the domestic world from the outside. We are taken on a dramatic journey through ornate ballrooms, barren woods in winter, and on to the towering pillars of St. Petersburg.

In the title role Audun Iverson is physically commanding, but I never believed that the brain and soul of Onegin – complex and tortured – was working behind his eyes. The climatic outpouring of love at the moment he realises his mistake of refusing Tatyana, did not capture the audience as it might have done.

By contrast, Amanda Echalaz (Tatyana) was wonderfully committed to the role, particularly early on. Her first act aria, as she battles with her feelings for Onegin, was breathless and raw – she seemed locked into the mind of a young adult, coming to terms with love for the first time.

But it was Toby Spence (Lensky) who sprinkled magic over this opera. His second act aria, moments before his fatal duel with Onegin, was spine-tingling. It showed what opera is capable of when directed and performed effectively. Throughout his performance Spence sings close to the edge, taking risks at every opportunity, and it is this that makes him so compelling to watch.

The second act also marks the peak of this particular production. It sadly never reaches the same heights once Lensky has died. The final goodbye between Onegin and Tatyana almost bordered on pantomime, and there seemed to be something missing from the final act in general. There did not seem enough tension generated by their re-introduction (after a three year separation) at the beginning of the act , and it proved impossible to regain that momentum from there on in.

The vast chorus perform well, but are never as engaging to watch as the dancers, who steal the limelight in the ensemble scenes.

It is a shame that the final moments of this opera fail to live up to much of what has come before. The second act, in particular, really is tremendously exciting, and if maintained, may have resulted in one of the opera events of the year.
Eugene Onegin continues until 3 December, book here.
Written by a Thoroughly Modern Man, Alex Knox.