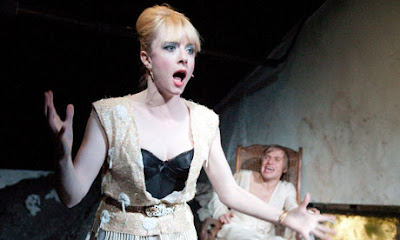 I was not around in the 1960s to know what it was like, but ‘Kingdom of Earth’, a primal and strikingly bleak 1968 play by Tennessee Williams, feels to me as if it is set much earlier. The Print Room are staging this forgotten play for Williams’ centenary year.

We are first confronted with a statuesque mount of clay, so big it covers a substantial area of the room, and casts an imposing shadow over the audience, a constant reminder of the characters’ impending doom. This play has only three players, just as the previous production at the Print Room did. Young and wildly energetic on stage, there is an enthusiasm in this cast that transfixed me in my exhausted post-work state. All three are impressively assured; I detected no faltering despite the intimidatingly intimate layout of the stage and the obvious daunting nature of ‘press night’.

Lot, a scrawny dying transvestite returns to his family home in the Mississippi Delta with his new TV wife, eccentric Myrtle. Here his animalistic half-brother, Chicken has been left to tend to the property, but is given no payment or recognition for his work, although he does have signed proof that when Lot dies the house will be his. A great flood is coming, threatening their lives. As Lot deteriorates he hopes to steal back the farm for his wife, while also desperate to pay tribute to his mother’s memory.

Of the three actors, I was most amazed by Joseph Drake, who I annoyingly recently missed playing the title role in ‘Vernon God Little’ at the Young Vic. Dressed in a vintage white suit and clinging pathetically to his ivory cigarette holder, he perches languidly on his mummy’s gold chairs, and gives a performance that is strange but brilliantly executed and oddly believable. His TB stricken rendition is painfully realistic and as he groaned and writhed about the floor tangled in a white dress I couldn’t help but shudder and turn away. Brother Chicken is performed as the exact opposite, a brute of a man, coated in a layer of mud. David Sturzaker seems to take it in his stride and roams about, menacing and yet strangely enticing. Showgirl Myrtle is taken on by fabulously confident Fiona Glascott, who has a difficult role playing the chatty blonde between the brothers. She could give a masterclass in southern accents, hers is so convincing, even managing to keep it up when speaking at great speed. She loses not a moment’s concentration, and shows a real understanding of the role particularly towards the end of the production as she learns the truth about her situation.

Director Lucy Bailey triumphs, as she always does with these morbid pieces… I suggested to the Print Room that they attempt a musical next, but the idea was sneered at! This is a theatre that wants to say something new, always challenge themselves and the audience. The set, complete with dripping water from the ceiling and fresh clay, was being watered for the next performance as we left. This imaginative design comes from Ruth Sutcliffe, winner of the 2009 Linbury Prize for Stage Design; she is one to watch.

I sat next to Tom (who owns the Tennessee Williams estate) and he preached to me before the show, “there is so much more to him that just Streetcar, everyone wanted another Streetcar, but Williams at his second best is still better than most.” And with this production I think he might be right.

Kingdom of Earth continues until 28 May, book here.