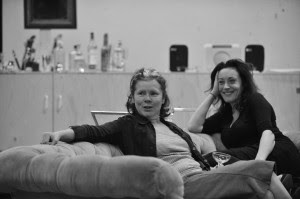 There is not much to Edward Albee’s ‘A Delicate Balance’, the new show at the Almeida. The play is rather overshadowed by the playwright’s earlier, better known piece ‘Who’s Afraid of Virginia Woolf?’ I booked tickets far in advance for this production, convinced that it would sell out thanks to the starry cast that includes Imelda Staunton and Penelope Wilton, but when I went along on the first night, there were still a few seats empty.
The notices by the entrance warn of two intervals – this immediately set off alarm bells in my head; it was going to be a long night. Parked in the cheapest £8 seats, we had several pillars restricting our view and were quite squashed on sofa benches among a group of loud Americans.

Life is pretty good for urban socialites Agnes and Tobias until their house is invaded by a troop of uninvited visitors. They now have to deal with Agnes’ rowdy alcoholic sister, their recently divorced (for the fourth time) hysterical daughter, and a couple of close friends who have been terrorised in their own home (by what we never find out) and so have come to stay, indefinitely. Accepting of their fate, Agnes and Tobias soon realise that these guests are revealing unwanted truths about their own lives.

The story sounds more enthralling than it is in reality. Set entirely in a comfortable sitting room the show feels quite static, with little action and even less excitement. It is incredibly slow paced, and if you fell asleep for an act you wouldn’t miss much plotline. The acting is, on the whole, convincing though not outstanding. I loved Imelda Staunton’s rendition of the mad drunken sister, gallivanting around causing trouble, shouting rudely and playing the accordion! Though she isn’t usually the villain, this role suits her and she had a real sparkle in her eye on opening night. Penelope Wilton and Tim Pigott-Smith are a good leading couple, though several line slip ups led my attention astray. I couldn’t stand Lucy Cohu as Julia though, she seemed completely insincere and shrieked in an irritating fashion throughout, she is more annoying adolescent than distraught divorcee.
The play came to an end after three hours, there were cheers of approval from the audience at the final curtain call, while I sat relieved it was over.
A Delicate Balance continues until 2 July 2011, book here.