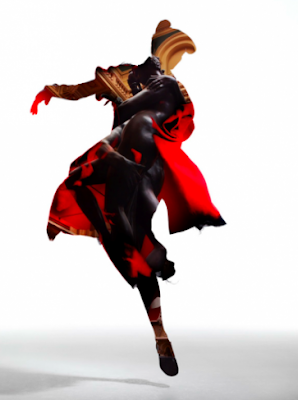 While thousands of miles away Japan deals with the aftermath of recent disasters, the V&A houses a solitary but striking exhibition of Yohji Yamamoto’s beautiful creations. This retrospective explores the work of this prolific Japanese designer and is the first exhibition to include his menswear.
Yamamoto was born in Tokyo in 1943 but spent a formative period in Europe after receiving two prestigious awards and drew influences from all over the world. His first collection, a ready to wear line for women was presented in Tokyo in 1977. He has always shown a deep interest in textiles and once said: ‘fabric is everything’. Through his collections he plays with tradition and challenges convention creating work that is unusual and never without a sense of humour.
This show is located throughout the V&A, and features several site specific installations. The central gallery features over sixty of Yamamoto’s creations and a multi-media timeline that demonstrates his wider output. The main room is flooded in bright white light, a clinical starkness that contrasts with the impressively tall statement garments. Though there is obvious Japanese influence in shape and design, Yamamoto departs from the traditional. In his 1994 collection he used Japanese dying techniques for kimono designs, producing a wonderful collection, signalling his arrival to the world of design.
Many characterise Yamamoto’s work by his frequent use of black, and though these evening outfits are simple and bold, it is the colourful clothes that most attract me: highly decorative two piece suits – I liked one which looked miraculously like a duvet skirt with dinky fur lined jacket, fun but sophisticated. Drapes feature a great deal and often the curve or shape of a garment is completely disguised by the billowing excess of material. The importance of shape is about the falling curves of the fabric rather than framing the woman’s figure, a mysterious and androgynous approach that Yamamoto is obviously aware of, stating: “All I wanted was for women to wear men’s clothes.”
My favourite men’s item is a marvellous jacket in gloriously bright pink and red with a tiger sewn on the back. It is radical and eccentric and would look wonderful on, but is equally breathtaking standing alone as an artwork. You certainly would have to find a brave man to wear many of the clothes on display here, wild and sometimes quite feminine, certainly cumbersome, they are not for your average jeans and t-shirt guy.
On the detailed timeline I was most interested in the costume features: Yamamoto’s collaborations with the theatre and stage, including groups like the Pina Bausch dance company. In 1993 he designed the costumes for Wagner’s ‘Tristan and Isolde’ for the prestigious Bayreuth Festival. The statuesque garments are said to have complemented the pared down set perfectly.
There may only be one main room of Yamamoto’s designs at the V&A but this single space gives a stimulating insight into this master’s work showing him to be a daring, avant-garde, free-spirited artist.
Continues until 10 July 2011, book here.