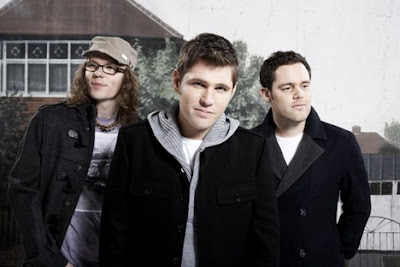 ‘Scouting for Girls’ isn’t my first choice of band to see in concert, but it is someone else’s and I was the happy recipient of the accompanying ticket. The band have been together since 2005 and have a fun pop sound. You may know them from popular singles like ‘She’s So Lovely’ and ‘This Ain’t a Love Song’ which made it to number one in the charts.
We drove out to Wembley Arena to see the gig, and joined a swarm of excited teenage girls. The venue is much bigger than I’d expected, and was full to its 10,000 capacity. We had good seats in the middle of the arena, I was relieved to be a little higher up than the beer-splashing pit this time. I needn’t have worried though, the fans were too preoccupied by the music to be disruptive or rowdy – everyone was content just having fun.
It was a very spirited occasion and I definitely became more of a fan as the evening went on. Although the four musicians had some difficulties living up to the secure sound of their records, and occasionally the songs sounded a little thin. Lead singer and pianist Roy Stride was full of contagious energy and was constantly encouraging the audience to join in. This was mostly lovely but there was a little too much sentimental chat about the fifth member of the band (us!). As is often the case, the crowd were less interested in numbers from the new album and instead calling for the favourite hits. ‘She’s So Lovely’ came as a final encore and was magnificent – I sang along and felt energised by the band’s passion. It was clear they were equally thrilled by the enthusiasm of the fans.
‘Scouting for Girls’ is a very likeable band and it was a pleasure seeing the boys perform. I couldn’t help myself humming their tunes all the way home.
Visit Scouting for Girls website here.