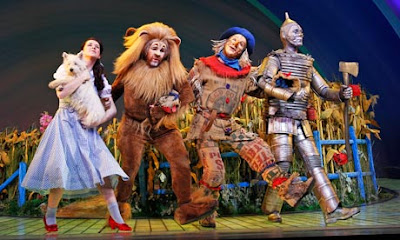 I was finally off to see the Wizard, the new production of ‘The Wizard of Oz’ at The Palladium. ‘Wicked’ has been dominating the London stage for long enough, it’s about time the original story marked its territory. I was unsure before arriving what to expect, I had read mixed reviews and with the stigma of Lloyd Webber, I was prepared for disappointment.

Having auditioned for Dorothy on the TV programme myself I was very eager to see the winning girl, Danielle Hope, in what is her professional West End debut. Even though she has just completed a three month intensive musical theatre course, no amount of training can adequately prepare a young girl for performing with a live dog, and this she does with ease and charm; she seems completely unfazed. She avoids the gushy sentimentality that comes with a part like Dorothy – she has a strong voice with just the right amount of vulnerability and an expression of hope in her eyes. I couldn’t fault her. This production also welcomes Michael Crawford back to the stage. Known best as the ‘original Phantom’ he is at home in this Lloyd Webber extravaganza.

No expense is spared with spectacular special effects at every turn. I was overwhelmed by the sparkling revolving set, the glorious costumes and the convincing cyclone film as the dear little Kansas cottage gets swept into oblivion. Each manoeuvre is executed to perfection, including incredible stunts hovering over the audience. Set and Costume designer Robert Jones is inspired with his crafty ideas and imaginative visions.

Along with the familiar classics, three new songs have been added in to fill out the show. Lloyd Webber and Rice have composed these additions and they are surprisingly acceptable, I assumed they would stick out like a sore thumb. The new numbers remind me of Wicked, unlike the original Harold Arlen songs in the Wizard of Oz, these have less repetition and move away from the innocent quality of the show. Hannah Waddingham is brilliant as the pointy nosed cruel witch, and even has her own song and dance, in which she does a bizarre Cheryl Cole like routine. Dorothy’s three loyal friends are well cast too, Paul Keating as the dippy scarecrow, Edward Baker-Duly playing a fantastic tap dancing tin man and David Ganly as the overtly camp lion.

It’s a real shame that the advertising for the return of this popular show is so kitsch. I was misled by the gaudy posters, and I’m sure many more will be put off from seeing the show altogether. Those that do chance it and go along will be glad they did; even those determined anti-Lloyd Webberites cannot deny this is an all round brilliant production.