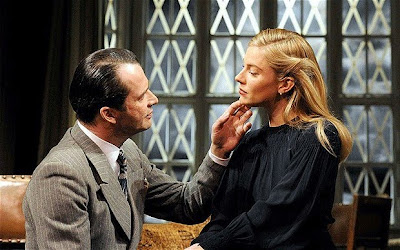 Trevor Nunn’s new production of ‘Flare Path’ at the Theatre Royal Haymarket is delightfully warming and optimistic. This play, rarely considered to be one of Terence Rattigan’s best, is moving and funny in equal measure.
The story takes place in a shabby hotel lounge reception, in the autumn of 1941 in the middle of World War II. The establishment accommodates RAF pilots and crews before and after their dangerous bombing missions, with the poor waiting wives in tow. As the men go out on a mission, there is a personal battle in the hotel as Hollywood star Peter Kyle comes to claim his great love, Patricia, a newly wedded woman with whom he has previously had a tumultuous affair. She has to decide who needs her more: the aging actor who is quickly losing his fame, or her outwardly brave and cheerful husband who confides in her that he is secretly terrified and crumbling under the pressure of his horrific job.
Sienna Miller is sure to be the box office pull for this play. Her natural beauty and allure is perfect for the part of the glamorous actress Patricia Warren, and paired with a suitably strained characterisation, she convincingly plays the role of the girl with a perplexing moral dilemma. She seems eager to please the spectators, though occasionally is a little too cautious, and could perhaps risk more power and passion.
Flare Path is an ensemble effort, with an exceptionally strong cast. The outstanding star for me is Sheridan Smith, the girl who made Legally Blonde such a hit at the Savoy. A former barmaid, she finds herself a Polish countess after marrying the Flying Officer Count Skriczevinsky (Johnny). Her chirpy demeanour and cute bubbly character entertains all at the hotel and indeed the audience too, but when her beloved husband is reported to be missing-in-action she is catapulted into grave despair. The depth of character she portrays is quite astounding and beautiful to watch; this is especially evident when a letter is translated for her telling of Johnny’s adoration for her. Her bravery and charm is quite heartbreaking and I’m sure I wasn’t alone in shedding a tear.
Harry Hadden-Paton excels too as scared Flight Lieutenant Graham (Teddy) and husband to Patricia. He is excitable and energetic and yet hides many of his feelings much like a teenage boy. Hadden-Paton manages the tricky balance between playing the role of a leader ( of the men in his squadron) and being desperately in need of care himself (eventually a job fulfilled by his wife). Of the supporting roles, I was stunned by my friend Matt Tennyson who I was thrilled to see taking the part of young waiter, Percy. So convincing was he that I only noticed it was him one hour in! Dashing about, he acted wonderfully amongst the cast of established stars fitting right in.
Despite sitting way up in the cheap seats, spending three hours straining my poor back, I absolutely loved every minute of Flare Path. This sublime production captured my heart and left me wanting more – another resounding success for the King of Theatre, Sir Trevor Nunn.
Flare Path continues until 4 June, book here.