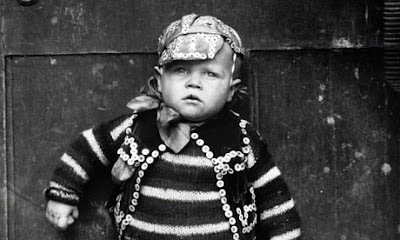 The first major E. O. Hoppe exhibition in thirty years begins with a dazzling silver print self portrait. I went along to the National Portrait Gallery for a lunchtime excursion on a sunny day last week. Even at 2pm on a Monday afternoon the gallery was busy, so I can only imagine what it is like at weekends. Notebook in hand I wandered round ready for my first Hoppe experience.

In the 1920s Hoppe was one of the most famous photographers in the world, and yet when he died in 1972 he was almost forgotten. He was a well connected man, a close friend of George Bernard Shaw, and evidently from this show, acquainted with rather a lot of other progressive and creative people. Celebrity portraits range from Thomas Hardy to Albert Einstein, King George V to Mussolini, and numerous names in between. All of these unique portrayals can be seen hanging side by side like a wall of fame. Many of the photos have been forgotten or lost and unseen before.

Hoppe’s images catch the sitter’s spirit, character and even mood. A rare picture of dancer and choreographer, Nijinsky shows him hanging his head in exhaustion, eyes closed, backstage after a performance, it certainly is not a conventional photo of this flamboyant icon. Hoppe is keen to express individuality and seems adamant that a genuine attitude should come across in the subject’s gaze, whether they are looking into the lens or gazing elsewhere.

When he wasn’t mixing with the stars, Hoppe was a pioneering street photographer, often using undercover equipment to capture his subject unaware. Most often he would use a hidden Kodak Brownie wrapped in brown paper, this enabled the remarkable spontaneity of the photographs.

Easily my favourite photograph of the lot is ‘The Pearlies’. This image (shown above) captures the concentration of a little boy tucked tightly into his stiff mini pearly outfit complete with cap. I was fixated by this little man, it reminded me of my own brothers posing and staring at the camera when they were toddlers.

The Westminster Gazette commented that Hoppe “may indeed claim to have made the camera sing” and I couldn’t agree more. With such illuminating portraits, I am just surprised it has taken so long for his revolutionary photography to be properly celebrated.