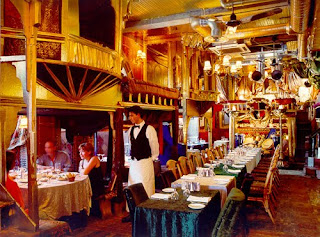 Sarastro or The Show After The Show, as it’s sometimes known, has been on my ‘to do’ list for far too long. This restaurant brightens up the whole of Theatreland with its outrageously flowery exterior. And inside it wows its visitors with the lavish decoration and opulent splendour.

I wanted to sit in one of the boxes which line the walls of the restaurant, and are not dissimilar to ‘real’ opera boxes. So, I went in the night before our visit to woo the waiters. It worked despite there being only two of us (the boxes are normally for six plus). They are used to cater for people pre and post show, in fact they expect you to be going to see something.

Opened in 1996 by owners Richard Niyazi and his nephews Salih and Richard Salim, Sarastro is one of a kind. The name ‘Sarastro’ comes from Mozart’s character in ‘The Magic Flute’. The restaurant is very theatrical and they always have appropriate music playing. If you’re lucky you might even catch some live music as on various nights they have opera and musical stars performing in the restaurant itself. Currently Sarastro has West End star Colin Roy singing a programme of Swing and Motown songs every Thursday.

The food was only average, we both ate steak which was a little dry and uninteresting. It is expensive for what you get. However you don’t visit Sarastro for the food, you visit for the experience. Open every day of the year, including Christmas Day and Boxing Day, Sarastro is an ideal place for parties or birthdays – the atmosphere is always dramatic and lively.