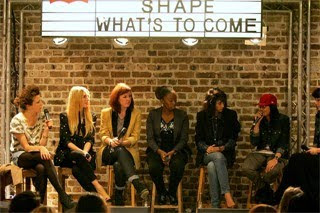 A few nights ago I was invited to the launch party of new Levi’s social network: ‘Shape What’s to Come.’ It aims to help and promote women in their individual creative quests. It took place in the Regents Street Levi’s store, that had been all kitted out for the occasion. Beers were available downstairs, alongside some intriguing mood boards to ponder over.

The evening began with a discussion, hosted by Annie Mac who was accompanied by SWTC Ambassadors: Kathryn Ferguson (filmmaker), Justice Williams (Tru Life magazine), Kristin Knox (fashion blogger), Ikonika (DJ/producer) and Anna Murray & Grace Winteringham (Patternity).Each woman had their own personal struggles and story to share with the room (which was, by the way, dominated by a 90% female audience).

Questions were fired at the team of ambassadors, and the room fell ominously quiet as one brave woman mentioned feminism. Only blogger Kristin admitted to adopting a feminist stance, the others seemed to shy away from the term, and I can understand why. They don’t want to succeed because they are women, but as creative people who are just as capable as men. I felt encouraged and motivated by these entrepreneurial young people.

After the panel discussion we were free to mingle and meet other hopeful interesting women, and I did. I talked for a while to blogger, Miss Geeky, and also had a chance to chat to Kristin Knox (and her adorable dog, Butters) about how she developed her blog and her passion for fashion. She was down to earth and honest, and after peeking at her blog (The Clothes Whisperer) this morning, I can also confirm her quirky talent.

A surprise performance by The Noisettes was the highlight of the evening for me. Lead singer, Shingai was looking gloriously glitzy and gave a spectacular performance with her band. The evening concluded with a set from Ikonika, a few more beers and I watched as the newly inspired women left smiling.