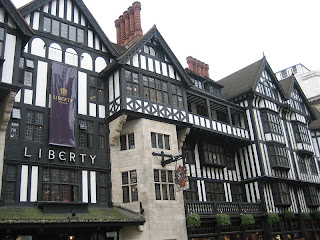 Which is your favourite London department store? After careful consideration I would have to award LIBERTY my first prize. The one-off store has a unique character unlike any other, and with such beautiful things inside, for me it is more like a museum.

Liberty can be found on Regent Street in central London. The business was started by Arthur Lasenby Liberty in 1874, after he worked at Messrs Farmer and Rogers also on Regents Street. He believed he could change the look of homewares and fashion. The shop opened in 1875 with only three members of staff, made possible because of a £2,000 loan from Arthur’s father in law. Initially he acquired only 218a Regents Street, but soon as the store became more successful he bought the other half of 218 and also the surrounding properties. Arthur was important to the Art Nouveau movement, and it is this style that makes the shop so appealing to me.

Liberty is most famous for its decorative floral prints. Delicately patterned and often brightly coloured these designs have been adopted by many designers. The Liberty design team re-work the classic prints every season, they say they are inspired by ‘nature, architecture, our heritage and the store itself.’

What I find most satisfying about this shop is the selection it offers. They seem to sift through all the designer’s collections to pick only the most desirable items. Even if you can’t afford to buy anything, Liberty is still worth a visit – a beautiful building with a treasure chest of goodies inside.