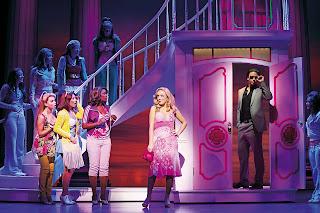 I have waited what seems an age to see Legally Blonde the Musical.

Actually the show hit London’s West End only six months ago, after receiving seven Tony Award nominations in its first year on Broadway. Already the English are hailing it a sensation, with The Independent claiming it ‘perfection’ and The Times thinking it ‘delightful’. I haven’t heard a bad word about it and was surprised to hear that even my football crazed boss at work is a fan. So what is it about this musical that is so universally popular?

Both the music and words are written by Laurence O’Keefe. The music is cheerful and catchy, and the repetition makes it easy for audiences to remember the songs. The lyrics are ingeniously snappy and sharp-witted. But this production possesses something extra to make it as infectious as it is: a superbly talented cast.

There is nothing not to adore about Sheridan Smith. A bubbly blonde (in real life too) she has a very endearing, unaffected charm that makes her instantly likeable. But that’s not all, she has real star quality as well. Starting her musical career young in the National Youth Theatre it is no surprise that both her singing and acting are of the highest standard. The role of Elle Woods comes so naturally to her that this London production becomes just as much about Sheridan as it is about Elle. Any thoughts of Reese Witherspoon fly out the door.

I attended Legally on Richard Fleeshman’s opening night as the shallow Warner Huntington III. Despite being barely 21 years old Fleeshman excelled onstage and bounced off Smith’s theatricality beautifully. I could easily rant on about the other fabulous cast members: Alex Gaumond as Emmett Forrest, Peter Davison as Professor Callahan and Jill Halfpenny as Paulette Buonufonte, all three far exceeded my expectations.

Legally Blonde is a musical theatre masterpiece that deserves all the praise it has so far received. I can say, with no qualms, that it is the best show currently on in London’s West End.