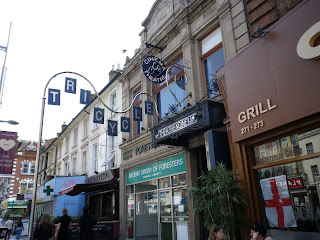 The Tricycle is putting on nine short plays this month on the topic of women in politics, all written by female playwrights. The plays are split into two sets, Then and Now, that together make up the best part of seven hours. An epic project that reminds me of Wagner’s legendary Ring Cycle.

The Tricycle Theatre is building quite a reputation for its interesting topical programmes promoting the work of new playwrights. Tucked away in Kilburn the Tricycle has a friendly inclusive atmosphere, with an inexpensive bar and relaxed seating areas. I was impressed to see such a diverse audience attending a such a specialised drama.

There is too much talent to mention here, both on stage and behind the scenes. On the whole though I preferred the Then section of the day, the plays were wittier and scripts more engaging. My favourite play would have to be the brilliantly funny ‘Handbagged’ by Moira Buffini. It explores the relationship between Margaret Thatcher (Mags) and The Queen (Liz) and their fall-out in the 80s. Particular mention must go to Claire Cox who acted brilliantly throughout, she often made eye contact with the audience making her performance all the more engaging. The verbatim reports that sporadically appear are very enjoyable; they feature snippets of politicians holding forth from Edwina Currie to Nick Clegg.

All but one of the plays are directed exuberantly by Indhu Rubasingham. These shows can be seen together but stand equally well alone.